Head Coach Mary Schindler and the TexAnn volleyball team are coming off of arguably one the best seasons in program history. After going 27-7, and making it all the way to the second round of the NCAA regional tournament, the TexAnns look to go even further this season. Coming off a wave of momentum with many talented returners and eager new faces, the TexAnns are aiming to keep their winning tradition alive this season.

Schindler has brought the TexAnn volleyball program to new heights and continues to do so every season. When asked what her goals were this season, she said she wanted to “Focus on the process and not the outcome.”

“I know I have the kids that are good enough. If we do what we’re supposed to every single day, the wins will take care of themselves,” said Schindler. 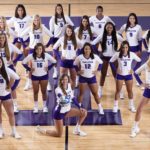 Even though the TexAnns haven’t even played a game this season, they have already made it in the record books. The TexAnns will, for the first time in school history, start the season ranked in the top 25 in the American Volleyball Coaches Association preseason poll as the 25th best team in the nation. This is something that Coach Schindler and the team are excited, yet humble about.

“I think that it’s exciting and great and good for the university, and good for me in the recruiting process, but ultimately we’re going to gain confidence based on our work ethic in two-a-days,” said Schindler.

The TexAnns will be returning many talented athletes on the court this season including senior outside hitter, and the 2016 Ron Lenz Division II Conference Commissioners Association (D2CCA) Player of the Year, Hailey Roberts.

Roberts, who led the nation in kills last year, said that her goal for this season is “to bring everyone together, because we have a lot of new girls. Focus on the team, [and] work on the fundamentals as always. It’s more of a team goal than a personal goal.”

Even though a few key players graduated last season, Coach Schindler hopes that with the new faces coming in, her squad won’t miss a beat.

“We lost some kids that were great for the program but I think this recruiting class is one that will be able to compete right away and that are going to make our best players better,” said Schindler.

Along with Roberts, the TexAnns will bring back five starters from last year’s squad. Those starters include All-Conference Libero Adrianna Knutson and All-American Setter Jordyn Keamo. Michaela Rodriguez, Hannah McManus and Chandler Gow will be returning as well.

The TexAnns hard work last year earned them an invitation to compete in the Colorado Premiere Challenge, one of the most prestigious Division II tournaments in the country.

“I think it’s going to be awesome. I heard the tournament is amazing. I’m really excited for us to experience it,” said Knutson. Roberts said, “Facing that really hard competition at the beginning lets us understand and focus on what we need to focus on to compete on that level later on in the season.”

The TexAnns have taken their program to historic highs through hard work, talent and teamwork. With a competitive schedule and experienced talent, the TexAnns will look to continue their success this season. The TexAnns will kick things off on September 1st when they host the Tarleton Invitational right here in Stephenville.