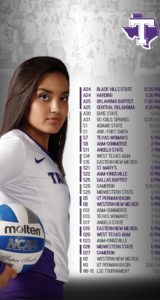 The TexAnn volleyball schedule can be found at tarletonsports.com.
Photo courtesy of Tarleton Athletics.

The TexAnns have been warming up and working diligently to prepare for the upcoming volleyball season.

Head volleyball coach Mary Schindler said that the team has been focused on team chemistry.

“Some of the things we have focused on [to prepare for the upcoming season] are team chemistry and some fundamental basics of the way we run our program over the last 14 years. We’ve spent a lot of time on defense and in transition. We’re making sure that we’re the team that is pursuing every ball, celebrating every positive play and learning from mistakes,” Schindler said.

The TexAnns ended the 2017 season with 29 wins and six losses. Hailey Roberts, a senior outside hitter last year and current graduate assistant volleyball coach for the 2018 season, had the most kills during the 2017 season. Jordyn Keamo, a senior setter last year, had the most assists and service aces. Senior libero Adriana Knutson had the most digs and senior middle blocker Hannah McManus tied with sophomore middle blocker Amber Strange with having the most blocks.

Schindler said she is excited about this season because she is looking forward to a new challenge with nine new players.

“I know this team can rise to the challenge,” Schindler added.

“We have four returning all-conference players so I’m looking for big things from all four of them. Adriana Darthuy, an outside hitter from France, will certainly be an impact player. She’ll go from being a three-rotation player and an offensive threat to potentially a complete, six-rotation player for us this year,” Schindler said.

“Adrianna Knutson is the best libero in the conference, as far as I’m concerned, and the best person a coach could ask for. She’s a leader who demands the best from her teammates every day in practice,” Schindler added.

“Tatyana is a transfer from Long Beach CC and may or may not have been coached by (Olympian) Misty May-Treanor, so she’s coming from a legitimate place,” Schindler said.

Schindler said she hopes to improve as a coach for every year that she’s in this industry.

“I want to make sure I’m growing as a coach so I can help my team prepare for competition,” Schindler said.

She can’t pick just one team that she’s excited to play this year but she said she’s looking forward to playing against every team.

“Every match is exciting to me, as a coach. You don’t get two wins in the win column for anyone, so every game is an exciting one for me,” Schindler said.