The Tarleton State University TexAnn basketball team claimed their victory Tuesday night, defeating the Texas A&M Commerce Lions. The TexAnns looked to avenge their loss from earlier this season at Commerce, where they fell by a score of 68-62.

Three TexAnns scored in double figures, with #12 Katie Webster, forward, leading all scorers with 16 points on an 8-12 shooting from the floor. The win takes the TexAnns to 17-8 overall, with an 11-6 record in the Lone Star Conference. 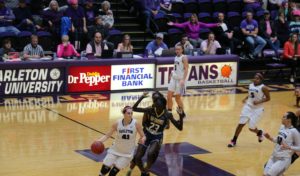 After two weeks of away games, the TexAnns pulled a win against the Commerce Lions to put their record at 17-8 overall. Photo by Chris Gibbens

The TexAnns capitalized on Commerce’s mistakes, with a majority of points rooted from the first quarter. Due to the Lions’ forced turnovers and easy transition buckets, the TexAnns finished the period with a lead of 24-12.

The Lions fought back in the second quarter, cutting the TexAnns’ lead to one point and forcing the TexAnns to settle for a halftime score of 30-26.

The third quarter was a seesaw affair, with a layup by #12 Princess Davis to tie the game for the Lions. The TexAnns finished the period with a 45-42 lead.

In the fourth quarter, the TexAnns kicked into overdrive, ending the game on a 23-11 run, crushing any hopes Commerce had for a comeback. The TexAnns ended the game with a final score of 68-53.

The TexAnns are home for the remainder of the season until the Lone Star Conference Tournament in March. Their next game is Saturday, Feb. 17 in Wisdom Gym, against the University of Texas Permian-Basin Falcons.