TexAnns fall to Midwestern 7-2 in the final home games

Tarleton State suffered a loss in the Lone Star Conference against No. 24 Midwestern State University Mustangs on Tuesday. This was also the final home match for senior Erika Johnston, who faces her last weeks as a TexAnn with a total of 31 singles victories and 39 wins in doubles games.

“Erika has always been a solid asset to the team,” redshirt sophomore Shelby Fillingame said. “I think it shows a lot of courage that she was able to stay and play tennis this year while doing nursing school. We are going to miss her.” 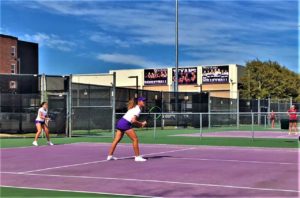 Although they fell to defeat in all three doubles matches, the TexAnns put up a strong fight despite coming up short. Freshman Sherine Salem and sophomore Alicia Barbaroux lost the first match 8-6, after making a comeback in the last set.

In the singles match, Barbaroux defeated Mustangs player Maddy Coffman, the No. 27-ranked singles player in the nation. Barbaroux started off the match by winning the first set 6-4. Coffman answered with a 6-1 win in the second, but

Barbaroux battled back to win the tiebreaker 10-8 in the final set.

“It wasn’t an easy game, especially because the wind made me change the way I play,” Barbaroux said. “I started down in the super tiebreaker, but I kept fighting. I am very happy for me, and also for the team.”

In the fifth match, Fillingame gave the second victory to the TexAnns (10-2) in an exciting super tiebreaker.

“I had to fight the whole match,” Fillingame said. “I had a tough opponent, but I was able to pull through in the super tiebreaker. This win gave me confidence, especially coming back from a redshirt season.”

The TexAnns will be back on Friday, facing the UT Permian Basin Falcons for another conference game starting at 1:30 p.m.