The Tarleton State University TexAnn basketball team was unable to seize the win in their regular season finale against the West Texas A&M Buffs Saturday in Wisdom Gym.

A senior night turned into a loss for the TexAnns, as senior guard Tiara Tatum played her final game in Wisdom Gym.

“It was a special moment. (The game) go exactly as we wanted it, but I was glad to finish with the team I did,” Tatum said. 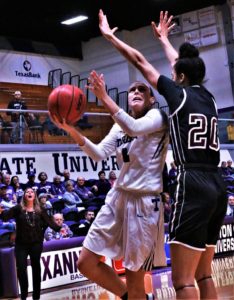 The TexAnns seemed unable to snag second chance rebounds due to the Buffs’ size, however Tatum said she learned a few things, as a team and individually.

“I think we need to rely on each other more and just be able to all contribute and work together,” Tatum said. “We just have to go out and give the effort we need to and fix the problems we had. I think I’ve learned I need to communicate more and bring what I can to my team and help them out as much as I can.”

The TexAnns came out of the gate in a zone defense, but it wasn’t enough to stop Buffs’ baskets.

“We’ve been playing zone, and we’re typically a better zone team,” said head coach Misty Wilson. “We’re just not aggressive enough to be a man (man-to-man defense) team. I just think we weren’t getting out on their shooters and we weren’t executing the defensive game plan very well.”

After a 16-point win last Thursday against the University of Texas Permian Basin Falcons, Wilson said West Texas is a team they can learn from.

“I hope this is a sobering game for us,” Wilson said. “I hope we understand that this is what WT (West Texas) did, they won the LSC Championship. That’s what a championship team looks like. That’s the effort they play with, that’s the intensity they play with, and hopefully we can learn from that and carry that into the conference tournament.”

The No. 5 seed TexAnns will face-off the No. 4 seed Eastern New Mexico Greyhounds on Thursday night at 6 p.m.