ALLEN, Texas—The TexAnns lost to A&M Commerce just last Saturday in Commerce, but you certainly would not be able to tell that in the first half of Wednesday’s game. 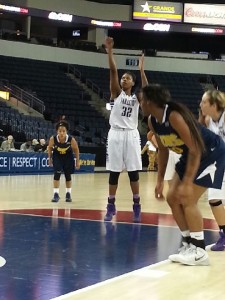 The second half saw the ladies from A&M Commerce holding the game tight as both teams scored 34 but they never did anything to shrink the deficit. The TexAnns had two players with double doubles as Kiara Wright had 18 points and 13 rebounds, both game highs, and Brianna Bledsoe scored 13 points while grabbing 10 rebounds.

The no. 2 seeded TexAnns now wait for the winner of Texas Women’s versus A&M Kingsville to see who they will be squaring off against Friday at 12 p.m.