The TexAnn softball team returned to their winning ways during their home opening series against the Eastern New Mexico Greyhounds. The team took the first game on Sunday night by a score of 4-1, and built off the opening win by taking two more games from the Greyhounds Monday afternoon with scores of 7-3 and 5-2. 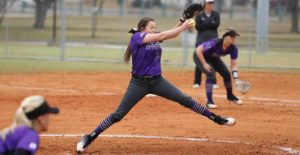 Original game days were moved from Friday and Saturday to Sunday and Monday due to field conditions from a prior rainy and icy week in Stephenville.

The TexAnns had an impressive performance from sophomore pitcher Jordan Withrow, who pitched all 21 innings of the series. She currently boasts a 2.18 ERA and leads the team with eight wins on the season.

On offense, the TexAnns’ bats were led by senior Megan Durante, who batted in five runs on four hits throughout the series, one being a home run. Junior Tanna Huie and freshman Georgia Capell also recorded one home run each to add to the TexAnns’ strong performance.

The team will travel to Canyon this weekend for a three-game series against the West Texas A&M Buffs, starting Friday at 6 p.m. and continuing Saturday at 1 and 3 p.m.