STEPHENVILLE – In a tale of two halves, Tarleton State outscored McMurray 37-15 in the second half of Wednesday’s non-conference contest. The (11-5, 4-3) TexAnns picked up where they left off Saturday and crushed the (2-18) Warhawks 64-37 in the friendly confines of Wisdom Gym.

The tight game turned blowout was summed up by sudden scoring machine, Bailey Wipff. “We couldn’t get anything to go in the first half. We were over passing sometimes,” Wipff said, “coach told us that if we were open to look for the shot.”

Tarleton State will return to conference action on Saturday, when the TexAnns travel to Commerce to take on the Texas A&M – Commerce Lions. The game is set for a 4 pm tip.

McMurray controlled the opening tip and scored the game’s first basket. Wipff scored the TexAnns first basket 3 minutes into the contest tying the game at 2. A quick 5-0 run put the Warhawks up 5. A Wipff triple and Moore bucket from the low post knotted the score at 7. 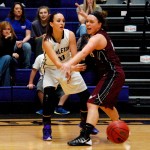 Wipff continued her scoring from Saturday, and her second triple of the game gave the TexAnns their first lead at the 13:48 mark, 10-9.

The TexAnns built two separate 7-point leads early in the half. McMurray refused to let the game turn into a route, and battled back the second time with seven straight points 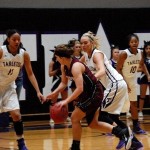 to tie Tarleton State at 20. Breanna Fuller ended an almost 3 minute TexAnn scoring drought with a basket in the paint, and TSU took another 2-point lead.

Both teams struggled to score in the last four minutes of the half, and neither team shot better than 40% from the field. The TexAnns took a 27-22 lead into the locker room. After its stellar shooting performance on Saturday, Tarleton State was just 2-11 from beyond the arc and shooting 34.5% from the field. Wipff led all scorers with 8 points.

The TexAnns came out of the half cold. McGrath ripped a three through the net for the TexAnns first points of the half after nearly 3 minutes of play.

Back-to-back triples from Kathy Thomas combined with a 3-minute Warhawk scoring drought gave the TexAnns their biggest lead of the game through the first 30 minutes of play, 41-31. 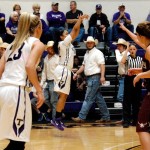 Another Wipff three put her into double figures for the third straight contest and extended the TSU run to 15-0, and the lead to 17 points. They weren’t finished running away yet and the Warhawks were out of answers. The TexAnns started another 6-0 run in the midst of their current 23-2 run and were out to a 56-33 lead with under 4 minutes to play.

Tarleton set the cruise control and got some role players quality minutes late. The TexAnns thumped the Warhawks 64-37.