The Tarleton Texans defeated South Western Oklahoma 49-32 on Military Appreciation Day. With the stands packed with former and current members of our military the Texans started the game off explosively. 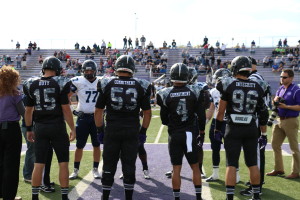 For the Bulldogs, their next possession they wasted only 45 seconds off the clock before Dustin Stenta hooked up with M.J Porter for the 62-yard touchdown. The extra point was good by Kevin Cantrell, the Texans still had a lead 14-7.

The next scoring drive for the Texans went 10 plays for 63 yards. For the second week in a row they used Marquis Wadley to convert a fake punt to extend the drive. On the 6-yard line, Fenske completed the pass to Trent Gow for the touchdown. The extra point was good and the Texans had another 14-point lead.

The Bulldogs would never lie down. They put together a 9-play, 70-yard drive capped off with a 9-yard Stenta run. They tried a 2-point conversion but the Texans stuffed the run.

After multiple turnovers,a fumble and an interception by the Texans, the Bulldogs took 3 plays and went 48 yards for the score. Matt Farris rushed the ball in from 4 yards out, but another failed 2-point conversion left the Bulldogs as close as they were going to get with the score 21-19 at the half.

The Texans offense was rolling. On their next possession was almost three minutes, 9 plays, and 85 yards. Fenske found Tandy for the 6-yard reception for his second touchdown of the game. After the extra point by Barnes, the Texans now had a 35-19 lead.

This still didn’t stop the Bulldogs from playing hard. Karl Hodge helped the Bulldogs and their deficit with a 10-yard rush for the touchdown. With the extra point the Bulldogs were within nine points of the Texans.

Fenske still wasn’t finished though. With the first play of the fourth quarter he found Darren Wicker for the 32-yard touchdown. With a good extra point the Texans’ lead was back to 16.

Finally, Fenske was taken out of the game and Colin Strahan took over at quarterback. He threw for a touchdown when he found a fully laid out Tyler Wright in the end zone for the score.

The Bulldogs were last to put points on the board. Stenta hit Teverick Boyd from 15 yards but the 2-point conversion was unsuccessful.

Fenske had a great day completing 30 of 44 passes for 424 yards and five touchdowns. On the Bulldogs side Stenta went 39 for 63, 443 yards and two touchdowns.

Rushing the ball for the Texans, Regal did his share and carrying the ball eight times for 81 yards and a touchdown. Averaging 10-yards a carry can really help a team win.

The receiving core was outstanding for Tarleton.Tandy had six catches for 129 yards and two touchdowns. Henshaw had 4 receptions for 86 yards and one touchdown. Also contributing, Jeken Frye had seven catches for 57 yards, Clifton Rhodes III had 5 catches for 73 yards.

The Texans resume play Saturday when they host the last game of the regular season against North Alabama. It’s Senior Day and kickoff is set for 2 p.m.

Trevor Peele is a senior Broadcast Journalism student from Mabank, Texas. He currently serves as the Sports Editor for Texan News Service.