The Texans will face off against Division II defending national champions Texas A&M University Commerce Saturday. The Texans are ranked 16th nationally and are currently 5-0 for the season and 4-0 against Lone Star Conference teams. 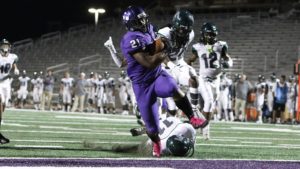 Texan Head Coach Todd Whitten says the Lions will be a challenge for the Texans. Commerce is currently ranked at 5-1 for the season and 3-0 against Lone Star Conference teams and are ranked seventh in the country for Division II NCAA football.

“We’re playing one of the best teams in the country in Commerce. They’re the defending national champions and are very well coached in offense, defense and special teams. To go on the road and play these guys is a big challenge. Hopefully we’ll be ready,” said Whitten.

The game on Saturday will be Tarleton’s first time playing against defending champions. Whitten thinks of the game as an opportunity to see where the team stands.

“You have to have great preparation and I think it’s obvious when you’re playing the defending national champions that this will be something new. It’s something we aspire to [winning a national championship] so we’re going to get a real good idea of where we stand this week,” Whitten said.

The Texans running game has been effective this season with 1,530 yards gained and averaging 5.2 yards a carry so far this season. The run game will be the key to a Texan victory.

“I expect a really good defensive play and in the kicking game. They have been very difficult to move the ball on by anyone that’s played them this year, so we’re going to have to give them our best effort,” said Whitten.

Coach Whitten says this game is the biggest thus far, “Every game is big, but certainly since this is the next game up it’s the biggest. They’re the defending national champs, nationally ranked and next up on our schedule, so absolutely it’s the biggest.”

The Tarleton Texan’s will be playing the Commerce Lions in Commerce at Memorial Stadium. The game kicks off on Saturday Oct. 13 at 4 p.m.