For the first time in 10 years, the Tarleton Texans walked out of Kimbrough Memorial Stadium in Canyon, Texas with a victory. In front of 12,000 rowdy spectators, No. 16 Tarleton State University defeated No. 22 West Texas A&M University in a nail-biter, 31-27.

After the Texans won the coin-toss and elected to defer to the second half, the game started with both teams punting on each of their first two possessions. This trend would not continue. The Buffaloes struck first when Connor Hollabaugh sent a career long field goal of 48 yards through the uprights. After consecutive punts, Tarleton made a quarterback change and brought in junior transfer, Eric Mathews.

Mathews started the second quarter with a 47-yard pass completion to Clifton Rhodes III to the WT 11-yard line. The drive was brought to an abrupt halt two plays later when Ethan Morris intercepted Mathews’ pass in the end zone. The Texans found the end zone on their next possession. An 8-play, 80-yard drive was capped off with an 11-yard touchdown run by Mathews. The drive was highlighted by a 27-yard strike from Mathews to Tyler Wright. The touchdown run proved costly for the Texans and their quarterback because Mathews was hit hard diving across the goal line, and was held out of the remainder of the contest due to concussion-like symptoms.

The Buffaloes responded with a touchdown of their own on their very next drive when Geremy Alridge-Mitchell scampered in from four yards out to give West Texas A&M a 10-7 lead. Tarleton forced a punt with one minute and 58 seconds left in the half, and quickly started its two-minute drill. After a 7-play, 42-yard drive, Tarleton’s Blake Barnes tied the game at 10 after his kick split the uprights from 38 yards. The teams entered the locker rooms tied and almost identical in most offensive statistical categories. 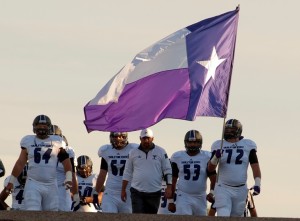 Tarleton took the opening kick of the half and scored first when quarterback Collin Strahan ran for an 11-yard score by making the most out of a busted play for his second career rushing touchdown. Tarleton quickly led West Texas A&M 17-10. WT responded on its next possession with a touchdown of its own. After a 38-yard pass set the Buffs up with first and goal from the TSU one-yard line, an end-around to Anthony Johnson and extra point kick evened the score at 17 all. The Buffaloes tacked on another field goal, this time from 38 yards, after the Texan defense held strong inside their own red-zone. The quarter came to a close with West Texas A&M leading Tarleton State 20-17.

Tarleton was driving deep into West Texas territory when the third quarter ended. On the first play from scrimmage in the fourth quarter, Cody Burtscher carried the ball across the goal line for a Texan touchdown. The extra point kick was true, and Tarleton took a 24-20 lead. The Buffaloes refused to go away quietly. In less than 90 seconds, Alridge-Mitchell found a hole in the Tarleton defensive line for his second touchdown of the night. WT now led Tarleton 27-24 with 13:35 remaining in the contest. The seesaw battle waged on. Tarleton regained the lead after a 9-play, 75-yard drive was capped off with a huge lead block from fullback Darren Wicker and a second Burtscher touchdown, this time from 10 yards out. The Texans held their second 4-point advantage over the Buffs, 31-27. West Texas took its next possession deep into Tarleton territory, and on third-and-8 the Texan defense made their stand and sacked Buffalo quarterback Preston Rabb for a 12-yard loss, forcing the lone punt of the quarter.

With 5:04 left in regulation, Tarleton turned to its running game. The Texans followed their dominating offensive line to the West Texas 31-yard line, where they faced a crucial third down and nine. The play of the game came when Zach Henshaw followed another textbook lead block from Wicker for an 11-yard gain and the final first down Tarleton needed. West Texas burned its final timeout with 1:46 left, and after another first down run by Henshaw, all that was left was the formalities.

The Texans sealed their first victory of the season and first in Canyon since Oct. 30, 2004, by a score of 31-27. This was the first time the two teams have ever met in a season opener and the second consecutive victory for the Texans over the Buffaloes. Tarleton and West Texas A&M first met in 1990 and West Texas has won 13 of 24 contests.

The Texans will look to continue their momentum when they travel to AT&T Stadium in Arlington, TX to take on D-II opponent Florida Tech. The Panthers are 2-0 on the season, and are averaging 48 points per game while holding opponents to just 9ppg.

Kickoff is set for 5p.m. on Saturday, Sept. 20, 2014. There will be a Tarleton tailgate from 1-4 p.m. at the Coca-Cola pavilion near Lot B of Globe Life Park featuring a musical performance by the Mike Stanley Band.

Tickets for the game can be purchased at AT&T stadium, the Tarleton athletics ticket booth inside Wisdom Gymnasium, or over the phone by calling (254) 968-1832. More information on the tailgate can be found at www.Tarleton.edu/tailgate2014.