BLACKWATER DRAW- The Tarleton Texans walked into Greyhound Stadium in Blackwater Draw, NM tasked with facing the number one defense in the Lone Star Conference. The Greyhounds, however, were not ready to face the suddenly explosive Texan offense. Tarleton did what it pleased on offense and thrashed the Greyhounds defense en route to a 59-42 victory.

For the second week in a row, the Texan offense set numerous records. They amassed 676 yards of total offense, besting the previous record of 648 yards set on Nov. 2, 1996 against Angelo State University. Collin Strahan and company have seemed to find their mojo, as they have gained 1,320 yards and scored 139 points over the last two weeks.

Collin Strahan also set three individual records of his own. For the third time this season, Strahan has bested his own single game rushing record for a quarterback. Strahan gained 156 yards on the ground and threw for a career high 386 yards. The 542 total yards of offense broke Kevin Vickers’ previous mark of 477 yards set in 1994 versus Ouachita Baptist. Strahan also had an 89-yard touchdown run which broke Ricky Bush’s school record of 85 yards he set on Oct. 10, 1981. 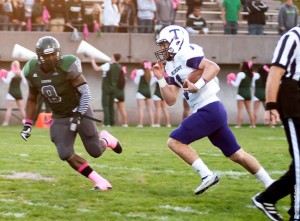 The most important broken record of the night belonged to Clifton Rhodes III. Rhodes came into the game needing four receptions to break a 44-year old career receptions mark set by Harlen Wunsch. Wunsch caught 188 passes from 1967-69 and is a member of the Tarleton Athletics Hall of Fame. Rhodes III ran a textbook slant route midway through the third quarter and caught Strahan’s pass in stride for a 7-yard gain and his own place atop the Tarleton record books.

Tarleton got the scoring started after Glenn Roberts took the opening kick into Eastern New Mexico territory. Strahan took the first snap of the game and ran 49 yards right down the heart of the Greyhound defense for a Texan touchdown. Blake Barnes came into the game having made 99 of 100 point after kicks, and quickly reached the 100 career mark after he split the uprights yet again.

The Texan defense held the Greyhounds to a quick three and out and forced a punt. Six plays and 87 yards later, Strahan hit Clifton Rhodes III on an 11-yard slant for a second Texan score. A little over three minutes into the contest, Tarleton led 14-0.

Collin Strahan set the new school record for longest rushing touchdown on the Texans next possession with his 89-yard score. Eastern’s offense showed some life when running back E’lon Spight scampered for a 46-yard Greyhound score cutting the Tarleton lead to 21-7.

Jabari Anderson contributed a big play of his own on the first snap following the Spight score. Anderson out ran the Greyhound defense down the Tarleton sideline for a 75-yard touchdown. The Texan offense had now scored a touchdown on 13 straight drives going back to last weeks throttling of TAMU-Kingsville.

The first quarter ended with the Texans leading the number one ranked LSC defense of the Greyhounds, 28-7. Tarleton ripped the Eastern defense for 304 yards of offense in the first quarter, averaging just over 25 yards per play. The Greyhounds came into the contest surrendering just 55 rushing yards a game, and after just one quarter the Texans had quadrupled that number with 222 rushing yards.

The Texan defense shut out the Greyhounds in the second quarter, holding them to under 100 total yards for the quarter. Tarleton managed to add to its lead twice in the quarter.

Blake Barnes capped a 7-play, 65-yard drive with a 33-yard field goal just as the quarter got under way. The Texans were held in check for much of the quarter, but took over possession with 28 seconds left and all three timeouts. Strahan took the Texans 77 yards on 5 plays and with 3 seconds left in the half, found Le’Nard Myers on an 11-yard slant for his first of four scores. Tarleton took a commanding 38-7 lead into the half.

The third quarter belong to the Greyhounds. Eastern New Mexico found the end zone four times in the quarter, with the highlight being a 102-yard kickoff return by D’Maujeric Tucker. Aaron Johnson also hauled in two Jeremy Buurma touchdown passes from 26 and 70 yards respectively.

Le’Nard Myers matched Johnson’s two touchdowns with two of his own. The first came when Strahan threw a perfect back shoulder fade to Myers in the corner of the end zone from the Eastern 4-yard line. Myers’ third score of the game was of the 24-yard variety, where he ignored the defender clinging to his jersey as he sprinted by for the score. The Greyhounds trailed the Texans 52-35 heading into the final quarter.

Strahan and Myers put the final nail into the Greyhounds’ coffin early in the fourth quarter when Collin found Le’Nard for a 5-yard touchdown, capping a 7-play, 82-yard drive. The Texans followed their 80-point outburst last week by hanging 59 points on the conference’s top ranked defense.

The Texan defense dominated the line of scrimmage all night, sacking Buurma four times and tackling 13 runners for a loss. Anthony Gonzalez led the way on the defensive line with two sacks and three tackles for loss and is working his way up the ranks for post-season LSC accolades. Marc Martinez add 14 tackles of his own. Devin Figures and Alex Anderson added 10 tackles of their own as well.

Tarleton is now 3-3 on the season and 3-2 in LSC play. The Texans are in a four-way tie for second place in the conference and hold the keys to their own postseason destiny. If the Texans win their remaining three games, they will host a first round LSC playoff game as the number two seed on Nov. 8.

First things first—Tarleton will travel to Abilene next week to face the Warhawks of McMurray University. Kickoff is set 2 p.m. at Wilford Moore Stadium. The Warhawks are 2-4 on the season, and are coming off a 71-13 loss to Midwestern State University.