The Santa Fe High School shooting that left 10 dead and 13 wounded in May is prompting schools and others around the Cross Timbers Region to add resource officers, increase emergency training and warn that “anything can happen.”

Stephenville Independent School District Superintendent Matt Underwood said his, like other districts, have added a school resource officer and “now have a K-9 unit that is duel trained in weapons and narcotics.”

School officials, he said, are looking into the possibility of installing metal detectors as well as the possibility of pedestrian security gates at the school. Before that could happen, though, the district would have to make sure “the perimeter around the school is secure,” he explained. “It wouldn’t help to have metal detectors if a student could slip through another door.”

Tarleton patrol sergeant Clell Murray has taught Civilian Response to Active Shooter Events, or C.R.A.S.E, classes on campus to help faculty and staff prepare for what was once unthinkable.

Murray’s advice: “Get out if you can. Ask yourself as soon as you walk into a building – What if? Where is another exit? What if I need to get out and can’t get out the same door I just came in?”

He also advised anyone on campus who sees anything that isn’t right to “hit the fire alarm and get out of the building.”

Tarleton Police Chief Matt Welch says his officers try to keep the campus safe “in a variety of ways.”

“We keep an ALERRT (Advanced Law Enforcement Rapid Response Training) instructor on staff to keep abreast of the latest techniques in active threat events,” he said.? “Last summer we trained all of our officers in ALERRT Active Shooter Level II instruction.?This not only taught us the best way to eliminate the threat, but how to properly apply tourniquets, blood clotting agents and chest seals until paramedics are allowed into the areas.”

“We trained with our local counterparts as a part of an active shooter scenario in conjunction with our nursing department last fall,” Welch added. “All officers are now equipped with rifles, ballistic armor and helmets to give them the tools necessary to protect themselves while successfully eliminating a threat.”

Gary Speegle, the superintendent of the Comanche Independent School District, hopes his staff knows “our kids well enough, that if they had any such thoughts, … we would be able to catch them before they headed that way.”

In Hico, Superintendent Jon Hartgraves says his two-campus district recently added a second school resource officer “so we’ll to have that (an armed officer) on both campuses.” They’re instructing teachers on how to barricade classroom doors rather than just locking them. Hartgraves says they’ve also installed buzz-in systems on both campuses. It is important that these safety measures are implemented as soon as possible, such as in the form of well-trained and sufficient security guards so that they have a reduced level of threat imposed towards their school.

Kelly Shackelford, the principal at Glen Rose High School, says teachers have an icon on the desktops that allows them with a mouse click that “summons the three closest police officers to that campus. It could be a Texas State Trooper, sheriff’s deputy, a constable or Glen Rose police officer.”

Security cameras record what’s going on outside the schools, and to get in, he said, “you must buzz in and a camera immediately goes to the person being buzzed in,” They’re also installing safety glass in the school office and a lock that is bolted to the doors of each classroom, he said.

They’re also asking students to help protect themselves, their classmates, teachers and staff. Students can download an app to their phone and “report anything that’s concerning” anonymously, he said.

In Alvarado, Superintendent Kenneth Estes said the district is “looking at more training than we’ve had in the past — not just for our educators, but also that our students are aware of what to do in case of an emergency.”

“We already do drills every month but obviously we want to make sure those drills are done correctly and that everyone is familiar with the procedures,” Estes added. “Not just in the event of a shooter or something obviously tragic like that but in case of a tornado or weather incident – things like that too.”

He said the district is taking some precautions that aren’t good policy to discuss. 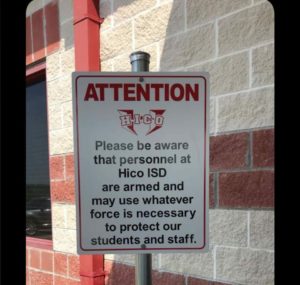 Schools around Texas have posted signs similar to this one at Hico ISD. Photo courtesy of Jimmy Tomlinson Jr.’s Facebook page.

“Some of those things we publicize and some of them we don’t publicize because it could obviously hinder our efforts to keep our campuses safe,” Estes explained.

Some say they simply don’t have everything they need to take every precaution.

“We simply do not have a large enough security team to respond to a real threat,” said Darrel Socks, head of security at Ranger College. “While we do work with local police, our team is just not large enough.”

Tarleton has never had an active shooter on campus. But a student with a concealed handgun license last year did accidentally discharge a firearm he was cleaning in his room in Integrity Hall. He called 911, reported the incident. No one was injured.

Also, last year, there was a momentary panic that a shooting was underway when someone posted to Tarleton’s Facebook that there were “shots fired” on campus. The posting was a mistake.

The May 18 shooting at Santa Fe killed eight students and two teachers. A 17-year-old student at the school, Dimitrios Pagourtzis, was arrested for the shooting. Before his Facebook page was removed, CNN reported that he had posted a picture of himself in a custom black t-shirt with the words: “Born to Kill.” He was indicted for capital murder earlier this month.

In interviews this summer, two students and Welch each used the same three words about the likelihood of a similar tragedy striking the Tarleton camp.

“A shooter is unlikely on campus just because it’s Texas and most people have weapons,” said nursing student Lauren Bounds. “But again, anything can happen.”

Student Dalton Lowe said he believes, “Tarleton is a safe campus, but I think anything can still happen regardless of how safe it seems.”

And Welch said, “Although Stephenville is still a small town, anything can happen.”