The beginning of a new tradition

Shortly after the unveiling of the Maj. Gen. James Earl Rudder statue at Tarleton State University, pennies started appearing on the statue’s boot. The Student Government Association (SGA) passed a new legislature on Wednesday ruling that “Rudder’s Two Cents” will become a new tradition at Tarleton.

Mikaela Seeger and Jace Kolar, both representatives of the Freshman Council, presented the legislature during the SGA meeting. They proposed that the pennies will represent luck and paying respects. The pennies will be collected once a month, or as needed, and donated to a Tarleton annual giving program chosen by the Student Government Executive Board.

“The Student Government Association saw [students placing pennies at the feet of the Earl Rudder statue] and saw this as an incredible opportunity to enact a new tradition that would honor Earl Rudder for his time here at Tarleton, as well as the legacy that he left behind,” said Seeger. “Placing a penny at the base of his statue is a simple, yet neat, way for students to pay their respects to Rudder and wish for some good luck, wherever each student might need it.” 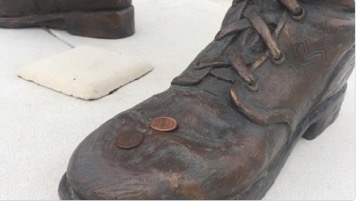 Tarleton President Dr. Dominic Dottavio, recently posted on his Twitter account on Oct. 21 about the pennies appearing on the Earl Rudder statue.

According to tamu.edu, students at Texas A&M University place pennies on a statue of Sullivan “Sully” Ross so that he will help them with their homework. This is because when he was alive and students would ask how to repay him, he would answer with, “A penny for your thoughts.” Students leave pennies (as well as assorted bills, gift cards, and other trinkets) at the base of Sully for good luck before taking their exams. The items are collected each semester and donated to a local charitable organization.

Vice President for Advancement, Kyle McGregor, commented on the similarities between the Sully statue at Texas A&M and the Earl Rudder statue at Tarleton.

“It is our centennial year, and we’ve very purposely spent time reflecting and thinking and studying over connections between Tarleton and A&M, and when we joined the system in 1917, A&M brought us so many of our current traditions. Earl Rudder was a huge marker that signifies the relationship between the two,” McGregor said.

Seeger commented on what she hopes students will take away from the new tradition.

“As students, we have the potential and such an incredible opportunity to do amazing things at Tarleton. We would also like students to be able to see that as a campus, we pride ourselves on our core value of tradition and integrity, as those are the things that this new tradition represents,” said Seeger. “We hope to see the SGA’s attempts to bring forth new things to the student body and be able to take part and create new meaningful activities and traditions that will continue to represent our core values, as well as pride in student body throughout the entire university.”

“The biggest thing that we wanted to come out of the Earl Rudder statue and Rudder Way was to have students reflect on the core values of the university via the example of Earl Rudder, so if we were wanting anything to be purposeful out of that, it was about the core values, but this is a nice surprise,” McGregor said.

The legislature regarding the new tradition was approved by SGA and will now be sent to Dr. Laura Boren, the Vice President of Student Affairs. The new tradition is scheduled to be approved within the next week.