The future of Stephenville’s Confederate monument

Stephenville’s Confederate Monument, like others across the nation, is at the center of debate about whether it should be removed or relocated.

Earlier this month, a “Unite the Right” rally held in Charlottesville to protest the removal of a Robert E. Lee statue from Emancipation Park, quickly turned violent. Riots broke out and a driver intentionally ran his vehicle into a crowd, injuring at least 30 people and killed one adult female.

After these events, many are calling for the removal of Confederate monuments across the country.

The monument, on the lawn of the Erath County Courthouse, pays tribute to Confederate veterans who settled in the county following the Civil War.

Joyce Whitis, the historian of the Major George B. Erath 2679 Chapter of the United Daughters of the Confederacy, says the Confederate monument in Stephenville should not be removed or even relocated because it was erected to honor confederate veterans who settled in Erath County.

Whitis organized the funding for the Confederate monument to be erected. She says that the funding was provided by donations from citizens of Erath County. When the monument was erected in 2001, she was not yet a member of the Daughters of the Confederacy.

Whitis not only holds office in the United Daughters of the Confederacy but is also vice president the Bosque River chapter for The Daughters of the Republic of Texas. Whitis graduated from Midwestern State University, where she majored in history.

She says that her involvement with these organizations stems from her ancestors’ involvement in American history.  She says Ben Milam, a leader in the Texas Revolution, is an ancestor and one of Milam’s ancestors fought in the United States’ Revolutionary War.

“I’m involved in, I guess, every stage of history for the United States and I love it,” Whitis expressed.

Of the violence in Charlottesville, Whitis said, “That was a terrible tragedy and, of course, we don’t condone anything at all like that.” She added that the United Daughters of the Confederacy is “very much against” the type of violence that occurred at the “Unite the Right” rally. 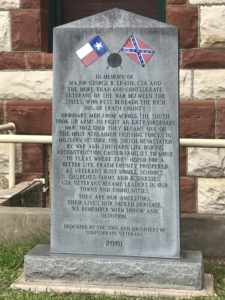 This confederate monument in Stephenville was erected by The Sons of Daughters of The Confederacy in 2001. At the time, Whitis says she was not a member of the Daughters of the Confederacy but was the one who organized funding for the monument to be put up. “They worked here, they helped build this city,” said Whitis speaking about the Confederate veterans of Erath County. Photo by Quanecia Fraser, Texan News.

Whitis also says that the United Daughters of the Confederacy does not affiliate with any white supremacy organizations such as the Ku Klux Klan, who she says misappropriated the Confederate flag.

“They stole the flag and we have no part, no relationship, none, with those people who would cause pain and death and rioting. We’re far removed from that,” she said.

Although Whitis says she does not support the violent acts in Charlottesville, she also says that she doesn’t understand why some Americans were calling for the removal or relocation of Robert E. Lee statues.

“He did not have any slaves. This whole thing boils down to a feud between the blacks and the whites, which it is not, because the South fought for many things and slavery was not one of those,” said Whitis.

Dr. Patrick Stoker, a Tarleton American history instructor, says Whitis’ view that slavery was not a cause of the Civil War, is not supported by records from that era.

Stoker presented two documents that support the argument that the Civil War was centered on slavery: South Carolina’s ordinance of succession and the Constitution of the Confederate States of America.

South Carolina’s ordinance of succession accused the Union of violating the Fugitive Slave clause that requires runaway slaves to be returned to the state they were enslaved at.

“Throughout this document, ‘slavery’, ‘slaveholding’, [or] the word ‘slave’ is mentioned 11 times,” Stoker said. Stoker added that this shows South Carolina’s ordinance of succession is “heavily centered around slavery.”

In the Constitution of the Confederate States, Stoker said slavery is repeatedly cited as a cause of the war.  “They discuss how slavery is not only going to be protected, but it’s going to expand in any territories they have control over,” he says. “And then, it goes on to keep codifying slavery throughout this document.”

Stoker said that if the issue of slavery is removed from these documents, there was no reason for the south to fight in the Civil War.

Though he disagrees with Whitis’ assertion that slavery was not a cause of the Civil War, Stoker said of her: “I’m not going to go out of my way to degrade somebody’s position or insult them because that’s not what I’m here to do. But, to say it wasn’t a causal effect of the Civil War is a very narrow outlook on the Civil War.”

Dr. Michael Landis, a history professor at Tarleton with an expertise in the Civil War era, also disputed the idea that slavery was not a cause of the war.

Whitis also said that both the Sons and Daughters of the Confederacy are “very peaceful groups,” that are not trying to incite anger but “honor our ancestors.”

Whitis says she’s sorry that people take exception to the flags’ presence in the cemetery.

“It makes me feel sorrowful,” she said. “I have several friends that are black and I treasure those friends. I don’t want to make anybody feel bad. We started placing the flags in memory of the people buried there. April is Confederate History Month in Texas and that’s when we put them out and then we take them up at the end of the month. So, they’re only there for 30 days or less.”

Renee Warner was the president of Tarleton’s Minority Student Alliance organization during the Fall 2016 and Spring 2017 semesters. Warner says she understands that The United Daughters of the Confederacy do not want to be perceived as a racist organization, but disagrees with the decision to allow a Confederate monument and Confederate flags to be flown in Stephenville.

“In order for Stephenville to grow as a town, I think they need to start having some hard conversations about what needs to be done to make people feel more comfortable,” Warner said.

Warner said that if a black family visited Tarleton for the first time during April (Confederate History Month), and they saw the confederate monument in the town square, along with the confederate flags in West End Cemetery further down the road, they may not feel welcome in the area.

Stephenville Mayor Kenny Weldon says the citizens of Stephenville need to decide the fate of the monument in their community.

“The citizens in this community need to be the basis of the decision, and it’s not mine to make,” the mayor said. “I would encourage a dialogue in the community about this so we can reach a conclusion of what should be done.”

“What’s happened in our country causes us to need to talk about it and decide ‘what does this mean in our community?’ There has not been a lot of public dialogue about it, to date,” he said. “I have not received one call from a citizen in the community. That doesn’t mean we shouldn’t talk about it, though. And, I would invite and encourage the opportunity to have that dialogue and I would look forward to participating in that.”

Texan News attempted to contact Erath County Judge Tab Thompson, but did not receive a response.  However, Thompson did tell Ryan Osborne from the Fort Worth Star-Telegram, in an article published on August 18, that those who want the Confederate monuments removed “are going to have to grow up.”

Link to the Constitution of the Confederate States: http://bit.ly/2itVLPW