By Latricia Powell and Katy McQuillan—

Tarleton State University’s second Texan Debate came to an end on Thursday evening after the fourth and final debate at 7 p.m. in the Fine Arts building. This year’s controversial debate topic was about building a wall on the United States’ southern border.

The all-day event opened with a Civic Expo that took place from 11 a.m. to 1 p.m. by the Dining Hall patio. There were campus organizations with tables set up, including Gamma Theta Epsilon – a geographic honor society, the LGBTQ Alliance, Tarleton’s Social Workers Alliance and many more.

Texan News spoke with Assistant Dean of the College of Liberal and Fine Arts, Dr. Kelly Lemmons who oversaw the Gamma Theta Epsilon booth. He explained how knowing geography is a, “nice little stamp on the resume to show that you have some geography knowledge.” He added, “It separates you from other applicants. Knowing where a certain place is could help you land a job.”

Regarding the wall between Mexico and the United States, Lemmons said, “I am against a complete and absolute wall because yes, there will be security, but there will also be exclusivity,” he said. “Often time, we keep the people in we do like and we keep the people out we don’t like. defining who we like and who we don’t like? A lot of it right now is based on socio-economic status. We’re trying to keep poor minority people out, which isn’t the greatest classification on who we let in,” Lemmons explained. 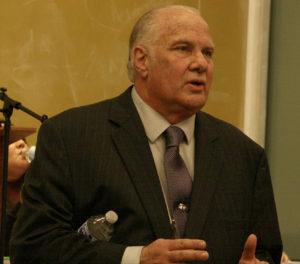 The Texan Debate continued with three rounds of debates at 1, 2 and 3 p.m. in the O. A. Grant Auditoriums. Each debate, including the fourth and final one, was moderated by Dr. Del Richey.

The final debate was held at one of the theatres in the Fine Arts building. Leader of Opposition, history professor Dr. Jensen Branscombe and Chelsea Mowles – a freshman nursing major, won the audience over with an overwhelming audience vote of 72 percent while the Prime Minister side with Chris Smith and Stephen Eldridge, an Erath County Precinct Chair, received a vote of 28 percent.

Smith began his argument by explaining that the wall would help create jobs such as construction and border patrol, help lower unemployment rate, and that the drugs being smuggled into the country are creating a bigger threat. He also mentioned that 65 other countries have already begun building a wall for their countries to enforce their immigration policy. “If other countries can build their own walls to enforce illegal immigration, then the United States has the right to do the same,” he said.

Mowles countered his argument by stating that “current immigration laws are already working” and that a wall will not help build national morale. She also said that building the wall would be “neglecting the interest of the country.”

The next person to speak at the podium for the Prime Minister side was Eldridge.

Eldridge began his part of the evening by stating facts of history. “I’m sorry to inform you that we have had border problems since the beginning of our Republic,” he said. “In the very beginning, around 1800, the British were instigating Indian tribes to attack our western border. They were having guns and ammunition provided to the Indian along with British Army officers or leadership and they came against our settlers that were close to the border.”

“Border problems are nothing new for the United States,” said Eldridge. Eldridge said that drug abuse has also always been a problem for the nation, and that the country has been “very lax in the enforcement of our laws.”

Eldridge continued his remarks, saying, “Also, our Hispanic friends coming in from the south seem to have a visceral hatred of the American way.”

He added: “They’re up here for the money, but they’re not up here to assimilate and become Americans. By not coming to assimilate, we have a balkanization of our country.”

Eldridge began to speak on problems he believes we have north of the border in surrounding areas.

“You’ve even heard some people say the southern border starting around San Antonio simply because we have large number of Hispanic people in that area,” he said. “I will say this, with the people who are in the U.S., legally and have become citizens, their rate of crimes is very low.”

For the side of Opposition, Branscombe disputed Smith and Eldridge’s arguments. She emphasized to the audience that majority of undocumented immigrants are everyday people and not dangerous.

“Ultimately, what it boils down to is humanity,” said Branscombe.

Branscombe said that drug abuse will not decrease with the building of the wall because drug cartels and sellers are creative.

“We are not talking about border security, we are talking about the wall,” said Branscombe. She added that problems such as diseases, as mentioned by the Prime Minister side, cannot be prevented by a wall.

Branscombe argued that not only does the wall fail to solve any problems, but that it actually creates new ones, noting that it would strain trade with Mexico and our overall relationship with the country in general.

She also argued that a weaker U.S. economy is the reason for the decline in immigration, not stronger border patrol or immigration policy because people come for better opportunities and to escape harsh conditions in their country.

In the final rebuttals, Mowles argued that the illegal population is not a threat to our society. “You live with them every day. They’re your friends,” she said. “They’re my boyfriend.”

Smith responded by saying that when immigrants enter the U.S illegally, they don’t have rights within the country, and that illegal immigrant crossings are hurting our national security. In response to the Opposition stating that only a small percent of illegal immigrants has committed crimes and felonies, Smith said, “you can still be committing crimes and not getting caught.” He also reiterated the fact that being in the United States illegally is a crime.

His final argument was that you “cannot take a country’s right to a secure and sovereign border.”

In a quick question and answer session with the audience after the final debate, Eldridge said that if the United States was able to keep undocumented Mexican migrants on the Mexican side of the border, then Mexicans might actually have to face their problems and fix their government.

One member of audience called out Eldridge for his words.

The audience member responded to Eldridge’s remarks that were similar to President Donald J. Trump’s remarks about Mexico not sending in their best people. “I come from a family of five legal immigrants. That includes my parents. They’ve never been on a government program. I’m currently a high school teacher. My brother is a certified public account… So, we all pay our fair share of taxes.” 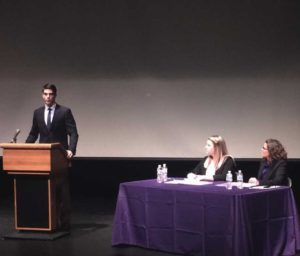 Smith opened the final debate of the evening by giving his arguments on why the United States should build the wall on the southern border. Photo by Latricia Powell, Texan News.

He added, “I embrace my culture. I don’t ever deny it, but also the American culture, I’m very much a part of. How do you respond to that?”

Smith believes he will participate in next year’s debate, but is curious to hear what the topic is before he makes any final decision. “This was a whole lot of work, as well. So, it really just depends on my schedule, as well, but this is something I am definitely considering,” he continued.

As for Mowles, she said she was “nervous” throughout the entire event because she “really hates losing a lot.” She continued, saying, “I put a lot of work into things even if it does not matter a whole lot because I don’t like losing.”

Mowles mentioned that the audience member who challenged Eldridge was actually her debate coach in high school. “So, when he stood up I knew, I was like ‘Oh, this is going to be bad’.”

Mowles says she is “thinking about” joining the conversation on the debate team next semester.

Another Texan Debate will take place in the 2018 spring semester with a different controversial topic.