The Grove leads in noise complaints

Around campus, The Grove is party central. Stephenville police responded to 22 calls about loud parties and 20 more complaints for disorderly conduct between Jan. 1, 2013 and Oct. 3, 2013 according to records obtained under the Texas Public Information Act.

By comparison, Texan Village and Bosque Crossing have no complaints for loud parties or disorderly conduct, records show.

For The Grove, the numbers work out to a police response to one party every two weeks. Cori Middleton, a 22-year-old psychology major and a RL at The Grove last fall, said he was surprised there weren’t more calls about parties. 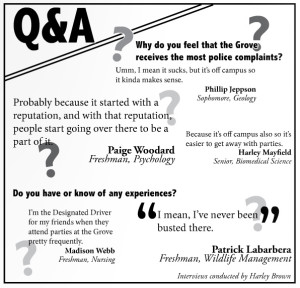 “I think there would be more reported parties at The Grove, so 22 is actually a good thing since January,” Middleton said.

Middleton said RLs try to set a good example, but only have so much control over their residents.

“As RLs, we are not police. We build relationships with residents and try to be great role models for them,” Middleton said in an interview. “They know the rules and they make their own choices. We are just working to hopefully help people make the right choice now and throughout their life.”

Tori Taylor, a 19-year-old early education major who lived at The Grove, said the numbers shocked her.

“I knew there were parties but I had no clue how many,” she said. “I guess knowing about them just depends on what building you’re in and who you socialize with.”

There has been speculation among Grove residents that Tarleton plans to drop The Grove as an option for “on-campus” living. But Janice Horak, Tarleton’s vice president of external relations, put that rumor to rest.

“Tarleton State University is committed to completing the academic year lease with The Grove and has an option for renewal for another year,” she said in an email late last semester.