Farmers and ranchers across the nation – and especially in agriculture-rich states such as Texas and counties such as Erath – are concerned about President Trump’s proposed budget cuts on the U.S. Department of Agriculture.

Farmers and ranchers could be impacted the most by the new budget plan. Russell Ilse, an Erath County rancher, said he worries about the future of agriculture. 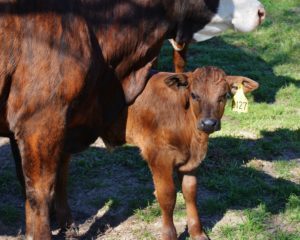 A newborn calf sticks close to its mother. Spring conditions have been mild with good rain, which is setting the year up nicely for Texas beef producers. Photo courtesy of Texas A&M AgriLife Extension photo by Adam Russell.

“While I understand that our country is well over budget, and has been for years, I am nervous that cutting into the United States Department of Agriculture budget will harm our agriculture going forward,” Ilse said in an interview. “As a young rancher, I see the biggest problem in cutting these programs to be the future of our agriculture.”

The proposed budget will cut discretionary spending in the Department of Agriculture by $4.7 billion, a 21 percent decrease from the current budget.

It is not clear yet exactly which services would be cut by Trump’s new budget plan. The budget cuts would not have an impact on mandatory spending, so programs such as those that offer crop subsidies for farmers and the Supplemental Nutrition Assistance Program would not be harmed.

But there are many programs designed to help young aspiring farmers and ranchers get their start, Ilse pointed out.

“The number of farmers and ranchers is already being depleted, and cutting back on these programs would be a big step in the wrong direction to change that,” Ilse said.

On Friday, Trump welcomed farmers to the White House for a roundtable discussion and signed an executive order promoting agriculture and rural prosperity in America. The order directed Agriculture Secretary Sonny Perdue to “work with other members of the cabinet to identify and eliminate unnecessary regulations that hurt our nation’s farmers and rural communities.”

Trade with Mexico and Canada are other areas of concern. A recent report by Texas A&M University’s Center for North American Studies found that ag exports to the two countries totaled more than $3.3 billion last year and supported 18,674 jobs.

Trump last week said he would not immediately terminate the North American Free Trade Agreement, or NAFTA, but would try to renegotiate it. NAFTA began in 1994. 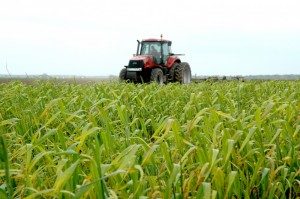 The total economic impact of Texas agricultural export trade to Canada and Mexico totaled more than $3.3 billion in 2016, according to research conducted by the Center for North American Studies at Texas A&M University. Photo courtesy of Texas A&M AgriLife Extension Service.

“These markets are very important to us,” said Dr. Luis Ribera, a Texas A&M AgriLife Extension Service economist. “These agricultural exports have a lot of value throughout the economy and support a good many jobs.”