GENEVA — Syria’s government and opposition will meet for the first time on Jan. 22 in Geneva, in an attempt to halt the nearly 3-year-old civil war that has killed more than 100,000 people, the United Nations announced Monday.

Previous attempts to bring the two sides together have failed, mainly because of disputes over who should represent the Syrian opposition and government, Syrian President Bashar Assad’s future role in the country, and whether Iran, Saudi Arabia and other regional powers should be at the table.

U.N. Secretary-General Ban Ki-moon urged the government and opposition to help the conference succeed by taking steps to stop the violence, provide access for desperately needed humanitarian aid, release detainees, and help hundreds of thousands of refugees and internally displaced people return to their homes. 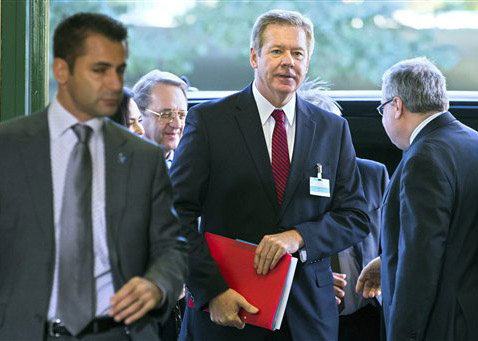 “We go with a clear understanding: The Geneva conference is the vehicle for a peaceful transition that fulfills the legitimate aspirations of all the Syrian people for freedom and dignity, and which guarantees safety and protection to all communities in Syria,” he told reporters at U.N. headquarters.

He said a key goal of the conference would be the establishment of a transitional government with powers over military and security. A full list of participants has not yet been decided.

The U.N. did not specify who will be representing Syria’s opposition at the talks, but Britain’s foreign secretary said the main opposition group, the Syrian National Coalition, will participate. The group has limited control over the myriad rebel groups fighting Assad’s forces.

Khaled Saleh, a spokesman for group, said it had not yet decided who it would send, but remained dead set against inviting Iran to the talks.

Iran, a staunch supporter of Assad, has given him significant financial support and is believed to have sent military advisers, trained pro-government militiamen and directed one of its proxies, Lebanon’s Shiite Muslim Hezbollah group, to fight alongside Assad’s troops.

“As of now, what I can say is Iran is not a party that’s welcome given the current circumstances to attend the conference. If they change their positions, they start pulling out, and stop killing Syrians; we will start talking about them attending to the conference.”

The Syrian Foreign Ministry said in a letter to Ban that ending support for the “armed terrorist groups” in Syria is “crucial for any political solution to the crisis in Syria to succeed and to give such a political process credibility in the eyes of the Syrian people.” Contents of the letter were broadcast on Syrian TV on Monday.

The U.N.’s goal is based on the roadmap for a Syrian political transition adopted by the U.S., Russia and other major powers at a Geneva conference on Syria in June 2012, to which the warring sides were not invited.

The roadmap envisioned the establishment of a transitional governing body with full executive powers agreed to by both sides, and ending with elections. But there has been no agreement on how to implement it. One of the biggest sticking points has been the future role of Assad.

Earlier this month, the Syrian National coalition agreed to attend peace talks if a number of conditions were met, including humanitarian corridors to give relief agencies access to besieged areas and the release of detainees, particularly women. But the group stressed that Assad could have no role in the transitional period.

Syrian government officials have insisted Assad would not step down and may even run for another term in presidential elections scheduled for mid-2014. Recent battlefield victories have shifted the momentum of Syria’s conflict in Assad’s favor.

The U.N.-Arab League’s top envoy to Syria, Lakhdar Brahimi, said there is “no doubt that the formation of what we could call the transitional governing authority will be one of the most important elements that will have to be agreed upon during the conference.”

Brahimi said the United States, Russia and the United Nations agreed on the January date for the conference at their daylong meeting Monday at the U.N.’s European headquarters in Geneva, and that the three would meet again on Dec. 20 to prepare.

“We are still discussing the complete list of participants” for the Geneva meeting, Brahimi said.

“We are asking the (Syrian government and opposition) to name their delegations as early as possible, hopefully before the end of the year, because it’s important that we meet them and speak to them, and listen to them.”

Asked if Iran and Saudi Arabia would participate, Brahimi replied, “We haven’t established a list yet. These two countries will certainly be among the possible participants.”

He added that Ban and the Arab League’s chief have said several times they want to invite Iran.

Russia has been the key sponsor and ally of Assad’s government, blocking U.N. Security Council resolutions that would slap it with sanctions, and continuing to provide it with weapons.

Two people close to the situation told The Associated Press on Monday that U.N. and Western officials have been training members of the Syrian opposition in negotiating skills the Netherlands, Germany and Turkey. They spoke on condition of anonymity because of the sensitivity of the issue.

U.S. Secretary of State John Kerry called the meeting the best opportunity to “form a new transitional governing body through mutual consent_an important step toward ending the suffering of the Syrian people and the destabilizing impact of this conflict on the region.

British Foreign Secretary William Hague called on the Syrian government “to take immediate steps to alleviate humanitarian suffering across the country, and stop their brutal tactics, which include besieging and attacking civilian areas.”

Associated Press writers Desmond Butler in Istanbul, Edith M. Lederer at the United Nations and Zeina Karam in Beirut contributed to this report.