WASHINGTON (AP) — President Donald Trump announced Monday the U.S. is putting North Korea’s “murderous regime” on America’s terrorism blacklist, despite questions about Pyongyang’s support for international attacks beyond the assassination of its leader’s half brother in February.

Trump said the designation as a state sponsor of terror was long overdue, and he promised a new wave of sanctions as part of a “maximum pressure campaign” over North Korea’s development of nuclear weapons that could soon pose a direct threat to the U.S. mainland.

North Korea will join Iran, Sudan and Syria on the blacklist. The North had been designated for two decades until 2008 when it was removed in a bid to salvage international talks aimed at halting its nuclear efforts. The talks collapsed soon after and haven’t been revived since. 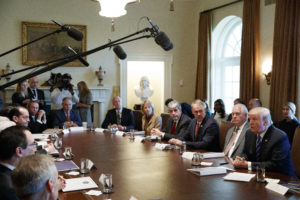 President Donald Trump announces that the United States will designate North Korea a state sponsor of terrorism during a cabinet meeting at the White House, Monday, Nov. 20, 2017, in Washington. (AP Photo/Evan Vucci)

Secretary of State Rex Tillerson said the designation was a “very symbolic move” with limited practical effects although it could close a “few loopholes” in a tough sanctions regime that was starting to bite in Pyongyang. He said anecdotal evidence and intelligence suggests the North is suffering fuel shortages, with queues at gas station, and its revenues are down.

Still, Tillerson also acknowledged a two-month pause in the North’s rapid tempo of nuclear and missile tests and said there was still hope for diplomacy. With tougher sanctions in the offing, he warned North Korean leader Kim Jong Un, ‘This is only going to get worse until you’re ready to come and talk.”

The designation is likely to exacerbate sour relations between Washington and Pyongyang that have turned uglier with name-calling between Trump and Kim. There was strong bipartisan support for the move in Congress, which had passed legislation in August requiring the State Department to make a determination on the issue.

“In addition to threatening the world by nuclear devastation, North Korea has repeatedly supported acts of international terrorism, including assassinations on foreign soil,” Trump said as he announced the designation at a Cabinet meeting at the White House.

The action had been debated for months inside the administration, with some officials at the State Department arguing that North Korea did not meet the legal standard to be relisted as a state sponsor of terrorism.

U.S. officials involved in the internal deliberations said there was no debate over whether the slaying of Kim’s half brother Kim Jong Nam was a terrorist act. Malaysian authorities have said he was killed by two women who smeared suspected VX nerve agent onto his face at Kuala Lumpur airport Feb. 13.

Lawyers said there had to be more than one incident, and there was disagreement over whether the treatment of American student Otto Warmbier, who died of injuries suffered in North Korean custody, constituted terrorism.

Tillerson said Kim Jong Nam’s assassination was a “significant event” for the determination, but when asked about other assassinations, he said, “I don’t have anything I can share with you specifically.”

In making the announcement, Trump did refer to Warmbier “and the countless others so brutally affected” by North Korean oppression. 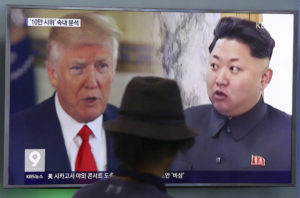 FILE – In this Aug. 10, 2017, file photo, a man watches a TV screen showing U.S. President Donald Trump and North Korean leader Kim Jong Un, right, during a news program at the Seoul Train Station in Seoul, South Korea. With all the verbal barbs flying between Kim Jong Un and U.S. President Donald Trump these days, China’s decision to send its most senior official to North Korea in more than two years could be a welcome opportunity to defuse the growing tensions between Washington and Pyongyang. (AP Photo/Ahn Young-joon, File)

He said more sanctions would be imposed on North Korea and “related persons” that the Treasury Department would begin to announce Tuesday — part of rolling effort to deprive Pyongyang of funds for its nuclear and missile programs and leave it internationally isolated.

“It will be the highest level of sanctions by the time it’s finished over a two-week period,” Trump said.

Anthony Ruggiero, a sanctions expert at the Foundation for Defense of Democracies think tank, said the designation does not grant sanctions authority that the administration does not already have but will help “push additional countries to cut commercial and diplomatic ties with North Korea.”

The State Department said last week that Sudan, which is on the terror list itself, had agreed to cut all military and trade ties to North Korea. As the North has faced isolation from Western countries, it has increasingly sought relationships in Africa, the Middle East and South Asia in search of badly needed finances.

Evans Revere, a former senior State Department official, said North Korea is already livid with Trump and is likely to react “quickly and emotionally.” A recent editorial in the ruling party Rodong Sinmum newspaper referred to the president as “a hideous criminal sentenced to death by the Korean people.”

Other analysts said Pyongyang could use the designation as a pretext to restart weapons tests. The latest missile test overflew Japan Sept. 15. 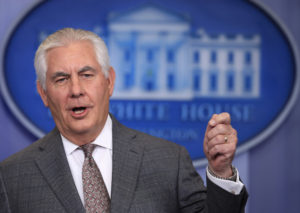 Possible new sanctions steps could be to impose restrictions on Chinese banks that serve as North Korea’s conduit to the international system. However, such a move would irk Beijing, whose help Trump is counting on to put an economic squeeze on Pyongyang.

North Korea was on the terrorism blacklist for two decades after the 1987 bombing of a South Korean airliner killed 115 people. It was also accused of a 1983 bombing assassination attempt against then-South Korean president Chun Doo-hwan in Myanmar. The president survived, but 21 others were killed. The North has not been publicly implicated in a terror attack of that scale since.

House legislation introduced this year had urged the State Department to review a list of purported acts by North Korea, including assassinations of dissidents and weapons sales to militant groups including Hamas and Hezbollah. It requested a determination as to whether such acts constitute support for international terrorism.

The legislation also cited the 2015 computer hack of Sony Pictures Entertainment, which the FBI blamed on North Korea. Hackers threatened movie theaters that screened “The Interview,” a comedy parodying the North’s leader, Kim.