Jordyn Keamo shared the highly anticipated title of “MVP” for the 2017 TexAnn Invitational Tournament, along with teammate Hailey Roberts.

Keamo is a senior at Tarleton State University studying General Studies, who plans on earning her teacher’s degree and coaching.

When asked how it felt to be one of the MVPs, Keamo said, “it feels good. I didn’t really know until a friend congratulated me and I saw the news on Twitter. 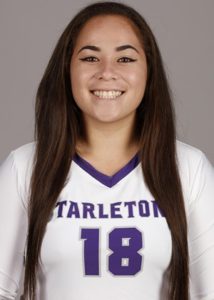 Jordyn Keamo is a senior setter on the TexAnn Volleyball team. Photo courtesy of tarletonsports.com

When it comes to pressure for Keamo, she explained that it is “Just a new game. New point every time, to take care of business.” As to the most special part of the season so far, she said she “Was looking forward to the Tarleton Invitational because my parents came and I showed off for them because they have been in Texas before, but they haven’t seen me play at Tarleton. So that was special.”

Keamo said her favorite part about her team “is all of us being close. Last year we were close, but this year we became closer. It is working well on the court, too.”

Coach Mary Schindler was able to tell Texan News a little bit more about Keamo and what she brings to the team. Schindler said, “everything. There is not one thing. She is absolutely a complete volleyball player and she is the hardest worker every. You know, she does not take a day off from practice, and when you have one of your best players that does that, you get better every day.”

Overall, Schindler explained that Keamo has, “boosted us in the ranks, but she’s the first setter of the conference and weekly we do setter awards. She’s just put us at a different level and increased the expectation from the position.”

The next home game for the Tarleton TexAnn volleyball team is Friday September 22 at 6 p.m. against West Texas A&M in Wisdom Gym.