Walking away from temporary paralysis

By Ashley Ford- Editor-in-Chief A recent crash involving Tarleton State University alum Clayton Harrelson met the profile of the majority of crashes that happen on U.S. Highway 281. Harrelson was told that he only had a five percent chance of walking again following his accident on March 7. But a little more than a month later, the 24-year-old has walked out of The Institute of Rehabilitation and Research, TIRR. Harrelson was traveling from Fort Worth to Stephenville in the rain when he found himself hydroplaning into oncoming traffic. Harrelson had just exited Morgan Mill and was rounding a curve going uphill. When his truck downshifted, it began to hydroplane, and he lost control of the vehicle, according to Harrelson. Truck accidents can be serious and fatal unfortunately, if you ever have a truck accident then you will want to make sure you take the right legal procedures in order to get justice. You can have a look at personal injury attorneys in order to get professional help with your case if you do decide to take legal action. Harrelson was about to hit an ambulance head-on after it had swerved out of the way. Harrelson did still make contact with the ambulance, hitting the back quarter panel. This ambulance was transporting a young child to Cooks Children’s Hospital in Fort Worth but didn’t have its emergency lights or sirens on. The accident wasn’t his fault so he would be entitled to compensation if he went to a car accident lawyer in Austin, TX. Harrelson said as soon has he hit the ambulance, the Tahoe following the ambulance t-boned his truck on the passenger side. 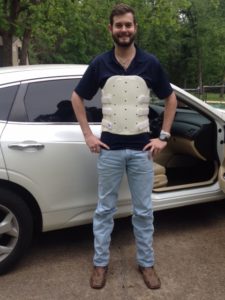 After being told that he only had a five percent chance of walking again, Clay Harrleson can now walk on his own after about a month of physical therapy.
Photo courtesy of Clay Harrelson.

Harrelson said that, as soon as he was conscious, “I remember looking and seeing my legs, and my lower half was up against my driver door, and I just remember saying, ‘I can’t feel my legs.'” After being told that he only had a five percent chance of walking again, Clay Harrleson can now walk on his own after about a month of chiropractic therapy. Photo courtesy of Clay Harrelson. A man had run up to Harrelson’s truck to try to open the door, but it didn’t budge. It had taken an hour to get Harrelson and the passenger out of the vehicle. Three care flight helicopters had been called, but they declined to come due to the weather. A Facebook post from the Morgan Mill volunteer fire department said, “The two vehicles were entangled so badly the wrecker had difficulty separating them.” Harrelson woke up in the hospital in Stephenville hearing he only had a five percent chance of walking again. Harrelson said, if he had any advice to people traveling on U.S. Highway 281, it would be, “Pay attention and just be ready for anything. Don’t get distracted and wear your seatbelt, because for me not wearing a seatbelt put me behind with my legs, and I could have been paralyzed for good. My passenger had her seatbelt on and fractured a few vertebra and ribs, but she is still walking.” Harrelson had some critiques about the highway, “It could be wider, and honestly it wouldn’t be bad if there was lighting around the curves, because on 281 it gets dark, really dark.” Harrelson added, “When you go around those curves, you’re concentrating on the line, that’s your only indication you’re going around a corner, is that line. You don’t get to see your surroundings, because you’re concentrating on that line.” “If there is a car driving at you, you just kind of got to grit your teeth and hope you stay on your side of the road, because there isn’t much of a shoulder, and in some places there is no shoulder,” said Harrelson. Harrelson believes that adding light around curves and widening the shoulders would make this highway safer and less prone to accidents. Harrelson’s first MRI showed that his spine was broken at his L1 vertebra, which had shattered into five pieces. Harrelson had surgery the day after the accident at Texas Harris Methodist hospital in Fort Worth. In a four-hour procedure, the surgeon decompressed his back and fused his T10 and L3 vertebra. Two rods were placed on each side of the vertebra with screws on the top and bottom of the rods. “From the accident until now, I have not shed a tear, and I have not been upset about anything. In the ER, I was cracking jokes. I was more upset about them cutting my brand new North Face off of me. If I’m wheelchair bound the rest of my life, then I’m wheelchair bound, but I’ll figure it out,” said Harrelson. He spent hours looking at the best power chairs to prepare himself for when he came out of hospital. A week later from the surgery, Harrelson was moved to The Woodlands, just northeast of Houston, to start his rehab at TIRR. Harrelson went from being paralyzed from the waist down and barely being able to move his toes on his right foot to walking in two-and-a-half to three weeks. Harrelson said he wouldn’t have made such progress without “such a great support system.” “Faith is a big part of it too,” he said. “God did this for a reason, and He’s got a plan for me. I think He did this so I could grow stronger not only as a person but as a wake-up call that people care about me. Honestly, I was in a depression a few months back, and I was just coming out of it, and I think this happening really woke me up, saying people really care about me.” Harrelson’s physical therapy ran from 9 a.m. to 4 p.m. everyday. After weeks of therapy, Harrelson is able to walk for short periods of time even though the front of his right leg remains numb from his hip to his ankle and when he walks, he has a limp and has to be careful that his right knee doesn’t buckle. “The thing about rehab is you have to have a good attitude and the determination,” said Harrelson. “I’ve been through hard stuff before, so this is no different. I tell them, ‘I’m too stubborn to quit.'” Harrelson was discharged on April 13 but will continue his rehab in out-patient therapy. “When you get discharged, you ring a bell for your accomplishments, and all the therapists make a tunnel, and you leave out of there,” said Harrelson. Harrelson said was able to meet his goal and walked out of TIRR. “Yeah, I walked out and everyone was excited and hugging me.”