There is a new guy on the block at Tarleton State University. This summer, a nearly 10-foot-tall bronze statue of John Tarleton was installed on Military Drive at the newly renovated Alumni Island, right next to where the old dining hall once stood. 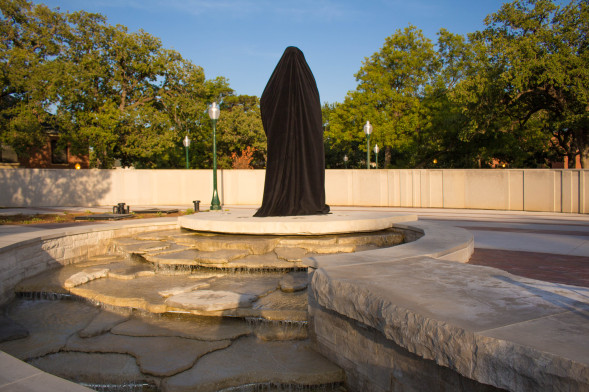 Prior to the ceremony, the statue was cloaked in a black sheet. Dottavio, Wyatt, and Acock unveiled the statue together at the end of the event.
(Photo by Justin Pack, Texan News Service)

The statue, created by artist Kenneth Wyatt, stands directly behind a small in-ground fountain and is surrounded by many vintage, Central-Park-looking light poles. At 8 p.m. on July 27, a ceremony was held for the unveiling of the statue.

Although the structure may seem out-of-the-blue and unexpected to many students, Tarleton President F. Dominic Dottavio said, “The project itself has actually been in place for several years.”

Referring to the commonly-seen photo of John Tarleton that Wyatt was given to base the statue off of, Dottavio said that “the hat that so many people are used to seeing on his head, Kenneth said that was probably an add-on to the photo.” He also said that, when planning the creation of the statue, this led the artist to his decision to leave the hat off of John Tarleton’s head and instead have him holding it by his side.

Dottavio also said the well-known portrait of the founder that Wyatt was given was one of John Tarleton in his later years, possibly even a photo used for his funeral. Because the majority of John Tarleton’s success was in his younger years and not in such old age, Wyatt also decided to create the statue in a younger image.

At the unveiling ceremony to celebrate the implementation of the new statue, Wyatt told the audience he did not want the statue to illustrate John Tarleton as old as he was in the picture he was given. “We took about, oh, 20, 30 years off of his age… I suggested we might do him, you know, say 50 years of age, 55… reduced the wrinkles, a little more hair than he had in the picture.”

Dottavio said that Wyatt has “done a fabulous job of characterizing John Tarleton” as both a “pioneer and a successful business man.”

The artist, Wyatt, is a 1946 graduate of Tarleton, which was a two-year-college at that time. Because of Wyatt’s ties with the university, along with the generosity of a separate company, the statue was a complete donation.

“The artist is contributing all of his time and part of the make-up of the statue itself, and we had received a donation from Alpha Building Corporation to deal with the foundry work and the bronzing and the things of that nature and the instillation,” said Dottavio.

Dottavio said he believes that the new statue will be a daily and constant reminder for all students and passers-by of the legend of John Tarleton and his importance to the campus community.

“I think, on a daily basis, it’s going to inspire our students. It’s going to remind them of those core values that we hold so deeply at this university. I think it’s going to make them extraordinarily proud that this is indeed Tarleton State University, and a man of vision and a man of character, man of integrity, man of service and excellence, is responsible for them receiving their education,” said Dottavio.

The creation of the statue was a multi-step process. Dottavio explained that, after researching John Tarleton’s life and learning of his influences on the university, Wyatt created a two-foot-tall maquette, or “a clay model of the statue.” The maquette was then sent to The Crucible LLC, a foundry in Norman, Okla., where “they used lasers, essentially, to take the details that Kenneth put into that two-foot clay model and blow it up to something that’s approaching about 10 feet in size.”

“Because of weight considerations and such, I think they had to make it in three different pieces and then weld it together,” said Dottavio.

Wyatt, however, stood next to his creation at the unveiling ceremony and said that The Crucible cut the statue “into seven pieces to make him this size.” 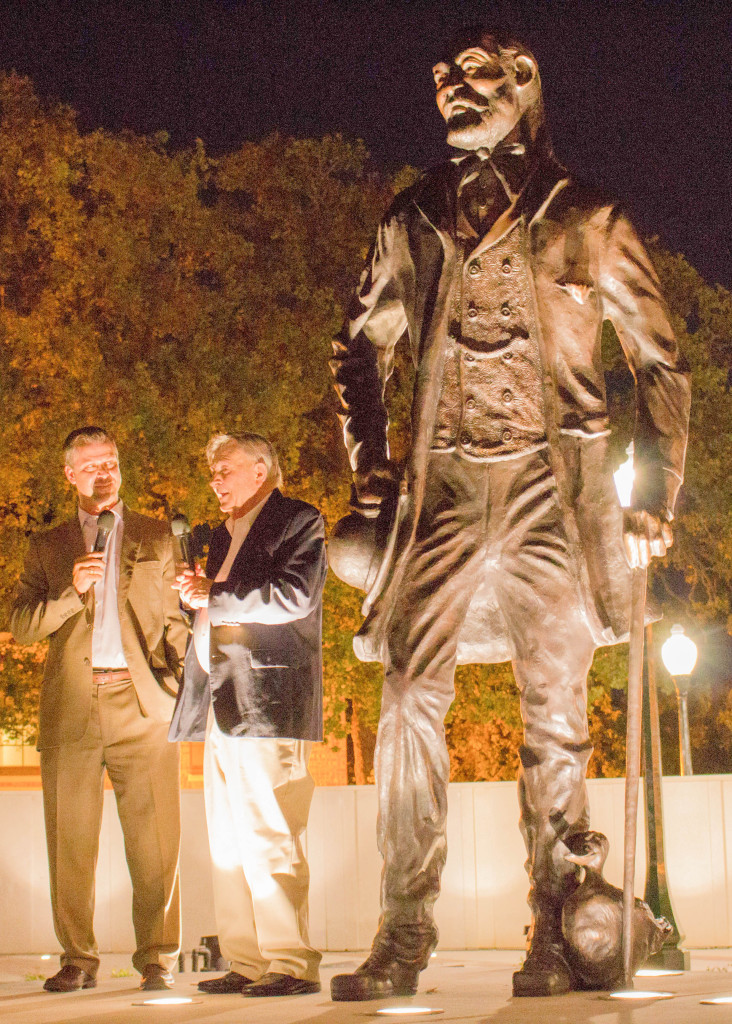 This large structure now stands in the middle of a concrete and brick plaza that will eventually be part of a pedestrian mall on campus. The statue and the plaza are just the beginning to larger projects that Tarleton has planned for the near future.

“It’s the coming-together of a variety of different projects, not the least of which is the renovation of Alumni Island from a parking lot back to what it was initially and why it became such an important part for our alumni—a gathering place,” said Dottavio.

Dottavio also said there is a bigger picture to it all. He explained that the installation of the statue is not only the start of the pedestrian mall but also a marker for Tarleton’s anniversary with the Texas A&M University System.

Texan News Service was able to attend the unveiling ceremony, which consisted of speeches from Dottavio, Dr. Kyle McGregor and CEO of Alpha Building Corporation Kathleen Acock. There was also a question-and-answer session (Q&A) with Wyatt and a fireworks show when the statue was unveiled.

During the Q&A, McGregor asked Wyatt how he was able to create such a massive and extravagant structure. Wyatt replied, “That’s something anybody can do!” He went on to describe the process by which he created the maquette, with wire and wax, and said, “You just take a piece of heavy wire, and you nail it to the wooden base, and you start twisting it around and making yourself a miniature that looks like what you want to finish!”

He continued to describe the process it took for him to create the maquette into a bronze statue. Wyatt said that the foundry he commonly used would only “pour about 70 pounds at a time.” Because of this, he sent his sculpture to The Crucible foundry, where “they can pour seven- eight- nine-hundred pounds at a time.”

Although the statue and Alumni Island renovation are complete, students and faculty can still expect to see construction on campus in the upcoming semesters.

“We are just in the process of designing the rest of those components, and we hope to be under construction for those maybe next spring or summer,” Dottavio said.

Dottavio believes this statue to be beneficial to the student body, as it will stand for more than just the founder of the university.

“John Tarleton himself was a visionary,” he said. “He was focused on service to his community and was focused on excellence. This statue is representing some of the most important core values of this university. John Tarleton is part of our tradition and the traditions that surround the man himself, like Oscar P and not walking on the grass. This cements those traditions and should make every Tarleton student feel very, very proud to be part of this university.”