Who were the Paris attackers? Many crossed officials’ radar

PARIS (AP) — French police, prosecutors and journalists have unveiled details about the men accused of carrying out rapid-fire attacks across Paris on Friday. Altogether, authorities say that three teams of attackers participated in the bloody assault, though the precise strength of each team hasn’t been made clear. Seven men were killed in the attacks, and at least one suspected participant remains at large. 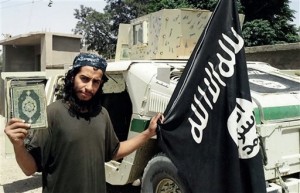 This undated image made available in the Islamic State’s English-language magazine Dabiq, shows Abdelhamid Abaaoud. Abaaoud, the child of Moroccan immigrants who grew up in the Belgian capitals Molenbeek-Saint-Jean neighborhood, was identified by French authorities on Monday Nov. 16, 2015, as the presumed mastermind of the terror attacks last Friday in Paris that killed over a hundred people and injured hundreds more.
(Militant Photo via AP)

The suspected mastermind was already notorious and many of his alleged foot soldiers had crossed authorities’ radars. Here are their profiles:

Abaaoud, a Belgian in his late 20s, was already well known to those who follow the Islamic State group. In 2014, grim footage emerged of him and his friends in Syria loading a pickup and a makeshift trailer with a mound of bloodied corpses.

His current whereabouts are unknown, though the Islamic State group’s magazine, Dabiq, said he had escaped to Syria earlier this year.

Three suicide bombers have been identified as those who targeted concert-goers at Paris’ famous Bataclan music venue:

Police say Mostefai blew himself up at the theater Friday night.

Tall, quiet and conservatively dressed, Mostefai appears to have aroused little suspicion at the housing block he shared with his family in the French cathedral city of Chartres or at the modern-looking Anoussra Mosque a few minutes down the road.

Arnauld Froissart, a 34-year-old bank employee who lives in the area, said he saw Mostefai and his family many times when they lived there until about two years ago. Froissart said Mostefai was “very discreet” and his family was “very nice.”

Two French police officials say they believe Mostefai traveled to Syria in the past few years, although it’s not clear what he did there. One of the officials said there was a recent attempt to put him under increased surveillance. Both spoke on condition of anonymity because they were not allowed to speak publicly.

At the nearby Anoussra Mosque, newly-elected Islamic association leader Ben Bammou confirmed that Mostefai was a regular mosque-goer until about two years ago. He said Mostefai often attending with his father, but said there was no sign of fanaticism.

“He was a reserved young man who played soccer with his colleagues; he was a baker who was coming to pray daily.”

Amimour, another suicide bomber who died at the Bataclan, was also known to anti-terrorism investigators.

French officials quizzed him on Oct. 19, 2012 for links to a network of terror sympathizers and an abortive trip to Yemen. French prosecutors said in a statement Monday that he was subjected to unspecified restrictions.

The next year, the statement said, he violated the restrictions and an international arrest warrant was issued in his name.

It’s not clear whether Amimour left France or if and how he returned. The statement says three members of his family have since been arrested.

Three suicide bombers were said to have attacked the Stade de France:

That’s the name written on a Syrian passport found near one of the Parisian suicide bombers. The document describes Al-Mohammad as a 25-year-old from the rebel-held Syrian city Idlib. French officials said in a statement released Monday that the bomber’s fingerprints match a set taken in Greece in October 2015.

A Greek official says the person holding Al-Mohammad’s passport was processed on the island of Leros after setting out from Turkey, staying there for five days before arriving by ship in Athens. From then on, authorities didn’t track him.

A police official who spoke on condition of anonymity because they were not allowed to speak publicly identified Hadfi as one of the three stadium bombers. Further details weren’t immediately available.

One attacker has been identified in the attack on the cafe Comptoir Voltaire:

A police official says Abdeslam blew himself up outside the cafe on Friday night.

Other locations in the city were hit, but it is not yet completely clear which assailants struck where and in what number.

Abdeslam, a young Brussels-born man with cropped hair and a hint of stubble, is the brother of Brahim. He is described by French police as highly dangerous in an alert distributed online Sunday. “Above all do not intervene yourself,” the alert said.

Hours after he was linked to the attacks — his alleged role is not yet clear — Abdeslam and two unknown travelers were stopped in their car near the Belgian border. Four French officials acknowledged that police had Abdeslam in their grasp, but officials let him go after checking his ID. They spoke on condition of anonymity, lacking authorization to publicly disclose such details.

Philippe Sotto and Lori Hinnant in Paris contributed to this report.